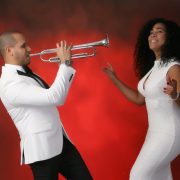 With a strong, distinguishable voice, Lisett Morales has become an icon in the Latin music community, and she has performed all over the world such as LA Cubafest, Cumbre Tajin Mexico, Curacao North Sea Jazz Festival, Lincoln Center for the Performing Arts, Atrium Martinique, Adriane Arsht Center for the Performing Arts, among others, and has even performed for President George W. Bush in 2004. With a style that invokes the legendary Cuban artist Celia Cruz, Lisett made her Off-Broadway debut as an Actress with “Celia (The Life and Music of Celia Cruz).” She is a bonafide showstopper with her sexy, yet dynamic performances. 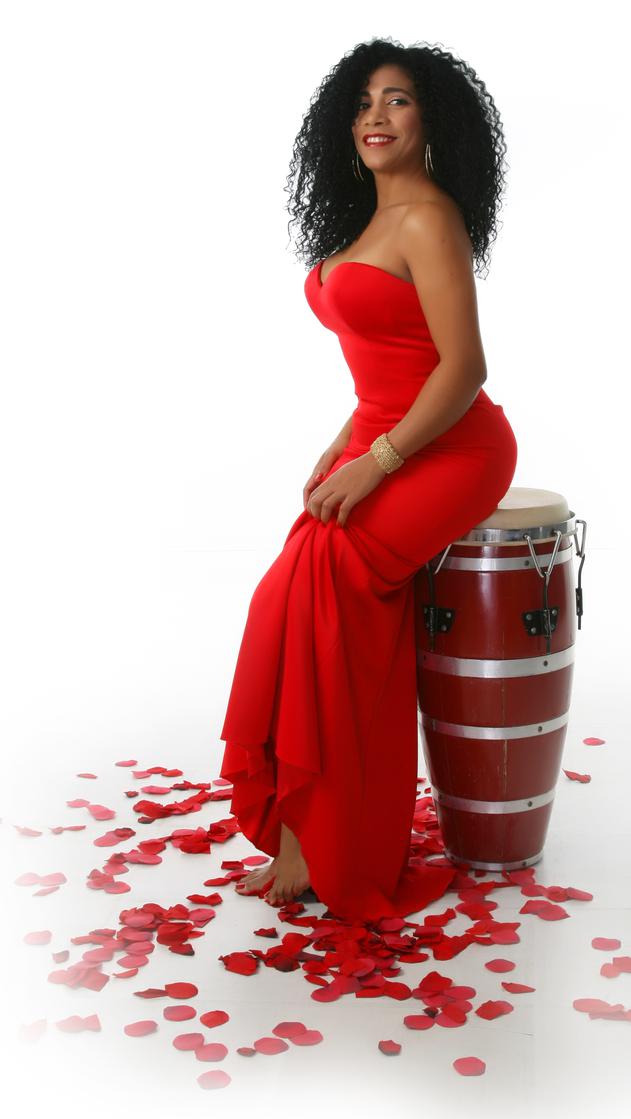 Lisett Morales was born and raised in Havana, Cuba. Her strong and unique tone of voice instantly made her a distinguishable Artist at a very young age, for which her Father, Severino Morales, realized she was going to be a talented and successful singer. It was not until 1998 when Lisett arrived to Miami, that her Father’s dreams came true. She believes her voice talented is something she got from her mother Nilda Robaina, a geography teacher who used to sing at home all the time so beautiful.

She started her artist career in Miami singing traditional Cuban music (Son, Guaracha, Chachacha, Bolero Son) with the Septeto Ahi Na’ Ma’ and had the opportunity to sing and record two albums with them. In 2002 they released the album “Ahi Na’ Ma’ La Mulata del Sabor” and in 2004 the album “Ahi Na’ Ma Con La Piña Pela” name of one of their hit songs A Maria le Gusta La Piña Pela’. This music group was an excellent beginning for her music career thanks to the great acceptation and support they had from their fans. One of the biggest events where they had the honor to play was in 2004 for the President of USA George W. Bush at The Miami Arena.

Lisett Morales makes her Off-Broadway debut as an Actress with Celia (The Life and Music of Celia Cruz). This honorable role landed her as the lead singer of the “Celia Cruz All Stars”, an Omer Pardillo’s project from 2009 where she was the lead singer for 3 years and participated in important events as “Amigos for Kids 2009” (Miami), La Cuba Fest 2011 (Los Angeles), La Cumbre Tajin 2012 (Mexico) and too many others.

After to many presentations on radio, TV programs and important events around the world, Lisett Morales is coming back with her most recent album “Lisett Morales La Mulata del Sabor”, produced by el Maestro Isidro Infante and the Grammy winner Marlow Rosado. This album has been her passport to the world. Peru, Colombia, Panama, Ecuador, Canada are few of the countries where the radio station’s DJ promotes her music. Lisett is also an excellent song writer and she only hasn’t written songs for herself but for different artist as Luis “Papo” Marquez, Sean Riva, Kevin Riva, Isidro Infante, La Kara’Bana & Juicy Juice. She is known also as “La Mulata del Sabor” and has been in stage with famous artists as Jose Alberto el Canario, Oscar de Leon, La India, Albita, Tito Puente Jr., Isaac Delgado, Marlow Rosado, Willy Chirino, Rey Ruiz, Hansel y Raul, Isidro Infante y la Elite, Domingo Quiñones and La Karabana.

*In 2013 the Orquesta Kara’Bana invited her to recorded their new album “Salsa Na’Ma” recording five songs, two of her own authority: “Me Gustas” and “Ponlo en Venta”. This CD is coming out on July 2014 by Select O Hits.

*In May 2014 Lisett was invited to participated in “The Afro International Festival of Panama 2014”, “The African Fashion Show of Panama 2014“ and the TV Show “Tu Mañana”. She was represented by Melida Harris President of Nic-Eth Productions www.nic-eth.com

* Also in 2014 Lisett Morales has been selected to be part of Larry Harlow’s Salsa Opera “HOMMY”. This event will return after 40 years on July 23, 2014 at The Lincoln Center of New York City. Lisett will be singing “Gracia Divina”, a song who recorded and sang Celia Cruz for this Salsa Opera 40 years ago.

*In 2018, after the big success with their most recent single “Somos Latinos” 2 and “Ganas de Ti”, this extraordinary Salsa singer and this virtuoso Cuban Trumpeter returned with another Salsa hits “Proverbios”, “Otra Oportunidad” and “Corazon Rumbero” feat Mayito Rivera el Poeta de la Rumba. These two great artists are The Perfect Combination!

Reinier Bonachea is one of the best trumpet player from Cuba. This excellent musician, arranger and producer has performed in jazz festivals all over the world such as North Sea Jazz Festival, International Jazz Montreal Festival, Miami Festival, among others. His great talent has allowed him to be one of the trumpet players most acclaimed by the great international stars of Salsa, such as Oscar d’ Leon, Jose Alberto el Canario, Issac Delgado, Albita Rodriguez, Alain Perez. 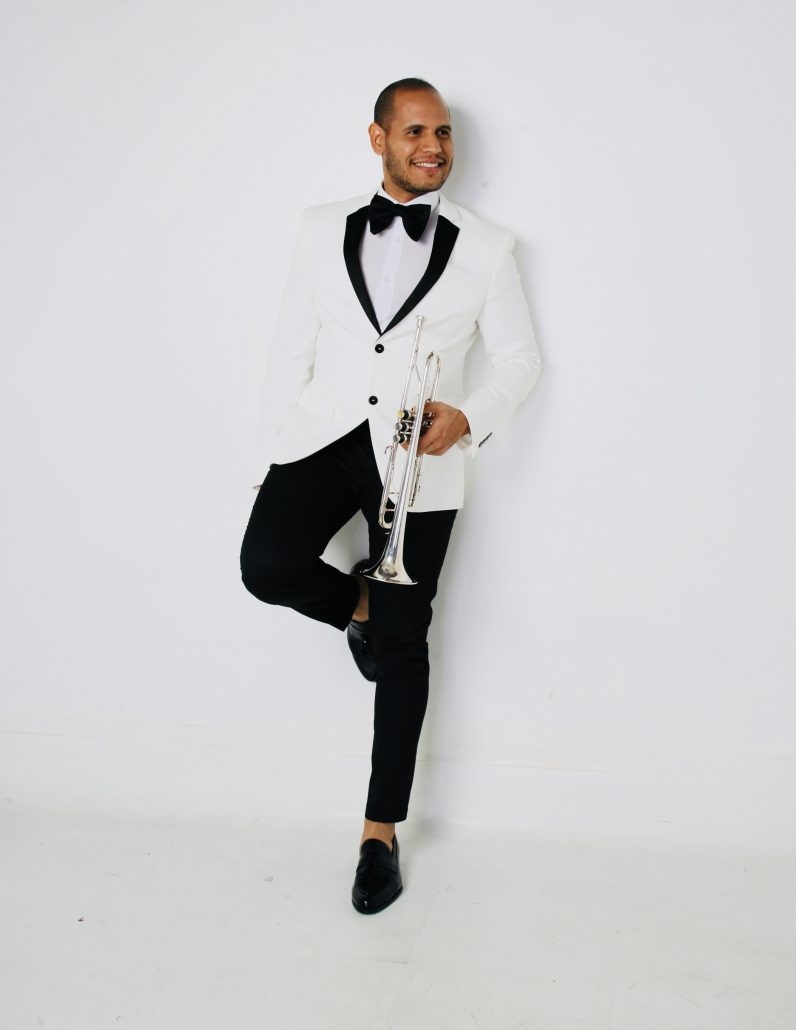 Reinier G Bonachea Diaz was born in Sancti Spiritus, Cuba. His musical journey started at the tender age of 7 years old and continues till he graduates on top of his class from the Ernesto Lecuona Conservatory of Music. He then moves to Habana where he starts his career as a professional musician, playing for the best orchestras of the country, such as, David Albares, Juego de Mano, Leoni Torres, Climax, JG y Su Groupo and El Nino y La Verdad, among others.

This excellent trumpet player has shared the stage with big names, with the likes of Omara Portuondo, Candido Fabre, Polito Ibanez, Paulo FG, Yeni, Van Van, David Blanco and Alexander Abreu etc, during the time he lived in Cuba.

In 2012 he does his first international tour in Canada where he participated in jazz festivals in Toronto, Montreal and London, Ontario.

In 2014 he travels to Cancun, Mexico to play in popular Salsa Festivals throughout the country. He then moves to Mexico City where he begins to play for the prestigious Orchestra Internacional Sonora Dinamita and tours the country with them.

On February 24th of 2015, Reinier arrives in Miami where he has played with many orchestras from many different countries, Colombia, Venezuela, Peru and Puerto Rico. In Miami, he has been able to accompany great cuban artists as well, Issac Delgado, Haila Mompie, Alain Perez, Cucu Diamante for example.

Reinier Bonachea is one of the best trumpet player from Cuba. This excellent musician, arranger and producer has performed in jazz festivals all over the world such as North Sea Jazz Festival, International Jazz Montreal Festival, Miami Festival, among others. His great talent has allowed him to be one of the trumpet players most acclaimed by the great international stars of Salsa, such as Oscar d’ Leon, Jose Alberto el Canario, Issac Delgado, Albita Rodriguez, Alain Perez.

In 2015 Reinier starts working on new projects with the excellent Cuban Salsa singer Lisett Morales. The couple has been working together ever since, and one year later they recorded their first album together “Puro Sabor” 2016, inspired by most of the Cuban rhythms and fresh lyrics written by Lisett Morales and musically arranged and produced by Reinier Bonachea. After the big success with their most recent single “Somos Latinos” 2017 and “Ganas de Ti” 2017, this extraordinary Salsa singer and this virtuoso Cuban Trumpeter returned with another Salsa hitS “Proverbios” and “Otra Oportunidad”. These two great artists are The Perfect Combination!!