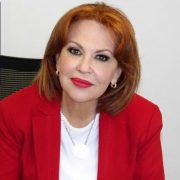 A seasoned leadership trainer and economic developer, Rodriguez Aguilera is an expert in government programs, she has used her expertise to assist over 800 businesses start and expand. She was the first economic developer for the City of Doral, putting her know-how to help grow jobs and strengthen local government, this included attracting thousands of businesses and creating an environment for business growth. Rodriguez Aguilera is a leading expert on issues of entrepreneurship, women, human rights, domestic violence and fighting human trafficking, working with leaders domestically and abroad. A former elected official, she has used her experience on how to cut-government red tape and knowledge on issues to host informative radio and television shows in, in English and Spanish, as well as serve as a recognized surrogate for various causes. She is a speaker, trainer, coach, consultant and author.

Bettina Rodriguez Aguilera, a renowned international speaker with over 25 years of, Trainer, Consultant and Coach in the areas of Leadership, Business, Government, Women’s Issues and Mind, Body and Spirit.  She developed the first Leadership Certificate Program for the University of Miami in 1994 and in 2015 founded the Miami Dade College Women’s Institute.  Her latest project is the Bettinara Enterprises- Business and Leadership Institute, where a team of leadership and business experts provide workshops and certificate programs.

Bettina is a Cuban exile, immigrating to the United States as an infant with her mother and older brother. She began working at the age of 13 to help the family with expenses, as her father was a Cuban political prisoner and wasn’t reunited with the family until she was 17 years old. Bettina graduated from high school early and helped put herself through college by starting her first business at the age of 18. Bettina graduated from Miami Dade College and continued her education at Florida International University earning degrees in Psychology and Social Work. She holds certificates from the University of Miami on Budget and Financial Management, Leadership certificate from Harvard School of Government through the National Hispana Leadership Institute (NHLI) fellowship as well The Center for Creative Leadership, Crosby Quality College and Stephen Covey University.

Dedicated to improving her community, she interned at Miami Dade Welfare department and upon graduation; Bettina began a 17-year career working within Miami-Dade County. She started as a social worker and quickly ascended through the ranks working in multiple departments including the County Manager’s office and serving as an ombudsman, helping citizens cut the many levels of governments’ red tape.

1992 to 1993, she had to undergo three open face surgeries due to the overload of work, her department was reduced from 35 to 3 employees.  During this time she went through a divorce and had her two children to sustain.  She went to a women business meeting and from their started her business of informing businesses of the opportunities government provided to individuals and the business community. She became an expert in government loans, grants and business certification for government contracts.  She later opened a non-profit, New Women Entrepreneur Center whom she led for seven years. Bettina put this expertise to work not only in the USA but assisting Ghana, Africa, and Lithuania start similar programs.  She has crafted hundreds of business plans, minority certifications and business loans, assisting over 800 businesses start and develop.

Bettina has also authored over 25, three-day training programs in the areas of Government, Leadership, Business and Women’s issues that has taken her  to over 20 countries around the world where she has empowered over 4,000 professionals and students and hundreds of trainers. In Albania, she spent three month undergoing a Advocacy-Democracy mission in cooperation with a non-profit and the USAID (United States Agency for International Development) and assisted in developing 17 new laws after the fall of a 50-year dictatorship and trained lay people, lawyers, journalist and elected officials including preforming the first Press conference in 50 years and passing the first law against domestic violence.

2008 she started working for the City of Doral as the first Economic Developer. She wrote the strategic business plan, she developed several financial and marketing documents and assisted to launch the City to be recognized as the #1 fastest growing City in Florida and the #2 in the United States.  She later resigned ran for office and won, and also served as Vice Mayor. As Vice Mayor, she wrote and passed laws against Human Trafficking, (this led to the closing down of two human trafficking centers in the City) the Commission on the Status of Women and programs for disabled residents as well as programs to assist businesses.

In 2015, she established the first Women’s Certificate program at Miami Dade College, Women Empowering Leadership (WEL)  a 126 hours. Three course 18-week program covering the past, present and future struggles of women, whom she authored and teaches.  The MDC Women’s Center has since expanded and will now be offering five additional programs.

Bettina is currently co-authoring “ The Big Secret” anthology with Jack Canfield, her chapter is called “ Giving Yourself Permission, 5 steps to Make it Happen , it  will be available January of 2017.  Another book is scheduled to hit the market in time for Women’s history month In March of 2017, the book is based on her Women Leadership program, entitled-New Woman Leadership Workbook,