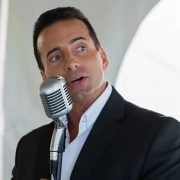 The renowned vocalist Frank Barbato “Frankie B” is a self-taught natural talent singing the legendary sounds of Frank Sinatra and other classic standards.

Frank Barbato ” Frankie B ” a cousin to the Sinatra Family keeps the legendary sounds alive with his amazing performances across the country.

Frankie B was born and raised in Rochester, New York and is named after his grandfather a mason from Bari Italy.  Incidentally, Frank is a cousin to the Sinatra Family.  Frank Sinatra’s first wife was Nancy (Barbato) Sinatra.

Her love and creativity for music, dedication to her family, and business acumen were some of the great contributions and positive influences that Nancy Sinatra Sr. had on Frank Sinatra’s music career.

The Barbato family lineage has a natural talent for music, creativity, and perseverance.

Frankie B discovered his love for music at the age of 5 and has been singing ever since to audiences.  He started performing with a local church drama group and has appeared in the Broadway Musical Godspell.  Frankie B’s performances at the Las Vegas Hilton and throughout the United States continue to gain him notoriety across the Country.

Audiences of all generations agree that Frankie B’s unique style, voice, and nostalgic charm of the great legends is unparalleled.

You can listen to Frank Barbato’s legendary vocals at a variety of Festivals and Concerts across our beautiful United States of America and Italy.  Frankie B is best known for his exceptional and captivating solo performances as well as live band and orchestra accompaniments.

Frankie B Supports Our Beautiful USA

One Nation Under God

Frankie B is a Proud Supporter of our Troops, Veterans, Police, and all Service Persons Committed to keeping our Nation and our Citizens Safe.  Thank you for your Service and Commitment for US for Our USA.