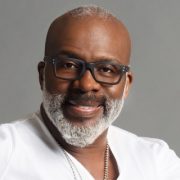 Critically acclaimed inspirational, R&B and gospel vocalist BeBe Winans is best known as part of the celebrated Winans family. Similar to the Jackson family’s impact on pop music, and the Carter and Cash families’ history with country, the Winans family is truly gospel music royalty. Also an award-winning songwriter and producer, BeBe Winans has achieved notoriety both as part of the hit-making duo BeBe & CeCe Winans and as a solo artist. (Still, the long-awaited duet CD and first Bebe & CeCe album in 15 years, is approaching Gold.) Winans takes his artistic gifts to the next level with an uplifting new collection of patriotic songs, AMERICA AMERICA, a celebration of the heritage and history that we all share.

In the midst of an important election year, this would seem to be a perfect time to remind ourselves in the U.S. of all that we hold dear. “I’m on a mission to share these songs with as many people as possible,” Winans says. “As a nation, we are going through hard times; people are in need of an uplift. My hope is that these songs can be that, and much more.”

With the exception of three new songs written by Winans – the beautifully hopeful title track “America America,” the upbeat “We’re The United States of America,” and the poignant “Ultimate Sacrifice” – the album is comprised of songs long in the public domain. But what is amazing about this new collection is that Winans’ soulful, distinctive tenor gives the songs new life, as if we are hearing them for the first time.

“The inspiration for AMERICA AMERICA is the time we are living in,” he explains. “Sometimes, we forget that we are all Americans. At sporting events, when the national anthem is sung, everyone stands – black, white, rich, poor – everyone.”

The cherished “Star Spangled Banner” brings up poignant memories of his dear friend and frequent musical collaborator, the late Whitney Houston. She spoke with Winans about the revered anthem prior to performing a game-changing rendition of it before the 1991 Super Bowl XXV. He spoke with her again about the highly regarded hymn before recording his version for AMERICA AMERICA. (Winans also won a Grammy Award for co-producing the song “Jesus Loves Me” on Houston’s smash hit film soundtrack for The Bodyguard.)

He was actually working on another album when the idea for AMERICA AMERICA came to him, motivated by the challenges Americans from all walks of life are facing on a daily basis. “Lift Every Voice” and “America The Beautiful” are familiar to us, but Winans was able to bring who he is as an artist to these songs, giving each an inspired freshness. Each track on AMERICA AMERICA is approached with reverence, sung with grace and filled with encouragement. This includes the glorious title track and first single, “America America,” a soaring, affirmative tribute to this great country that we all share. A touching video for the single, shot in New York City and in our nation’s capital, Washington, D.C., by David Warshauer [artist credits], will soon be available.

“I have seen the power of music,” Winans says. “I want the nation to heal through this music. When our country is united, we find the path to success.”