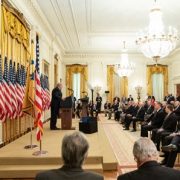 WASHINGTON – Today, the Department of the Treasury’s Office of Foreign Assets Control (OFAC) amended the Cuban Assets Control Regulations (CACR) to further implement the President’s foreign policy to deny the Cuban regime sources of revenue. The changes restrict lodging at certain properties in Cuba; importing Cuban-origin alcohol and tobacco products; attending or organizing professional meetings or conferences in Cuba; and participating in and organizing certain public performances, clinics, workshops, competitions, and exhibitions in Cuba. These regulatory amendments will become effective upon publication in the Federal Register.

“The Cuban regime has been redirecting revenue from authorized U.S. travel for its own benefit, often at the expense of the Cuban people,” said Treasury Secretary Steven T. Mnuchin. “This Administration is committed to denying Cuba’s oppressive regime access to revenues used to fund their malign activities, both at home and abroad.”

For the latest changes to the CACR, which can be found at 31 Code of Federal Regulations (CFR) part 515, see here. Major elements of the changes in the revised Treasury regulations include:

Concurrent with this change, the State Department is creating a new list, the Cuba Prohibited Accommodations List, to identify the names, addresses, or other identifying details, as relevant, of properties subject to this prohibition.

OFAC is eliminating the general authorization related to attendance at, or organization of, professional meetings or conferences in Cuba. These activities may be authorized via specific license on a case-by-case basis to the extent not authorized under other travel-related authorizations.

President Trump has selected Judge Barrett after careful review and a transparent...

President Trump Is Working to Promote Opportunity and Prosperity for Hispanic...